A couple of years ago, I was in San Fransisco watching a good friend  perform a magic show with several of his other magician friends.
One magician in particular stood out, so I waited after the show to congratulate him.

I introduced myself.  "Hello, I'm Michael Mosher."
the magician immediately asked;  " Are you Michael Mosher, TheWorld'sGreatestMagician? asked the  performer, blurring that phrase into all one word.

I humbly replied.. "Well.. what I saw you do tonight was great.. I just came over to tell you that I loved your work."

He told me a story.

"When I was little, I used to go to a restaurant that you performed at on Sunday mornings. I used to have my parents take me there EVERY week to see you do magic from table to table.  You're the reason that I'm a magician today!"

I was flabbergasted for so many reasons. He was a grown man and that made me feel old.  He was talking about a job I had when I was in HIGHSCHOOL 3,000 miles away in Connecticut!!

You NEVER  know how you're going to affect someones life, and you never know when you're going to bump into them again.  So.. the moral of the story?  Be nice to EVERYONE. Treat EVERYONE with respect. You NEVER know when you'll bump into someone that you've affected in some way or another.  I'd rather have a positive effect than have someone go through their whole life thinking I'm an @$$Ho%@.

Pre-website prices! 10% off until the website goes live!  Mismade monster is post paid in the continental US.
Sadly.. the Topsy Turvy Bottle trick will NOT be postpaid.  I just took one to the post office and it cost me $8 bucks to send it to Dallas....  I simply can't absorb that. I'll split the difference and charge $5 for shipping.

write to me at michael@makeupguy.com and I'll tell you how to Paypal! 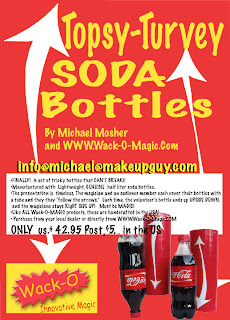 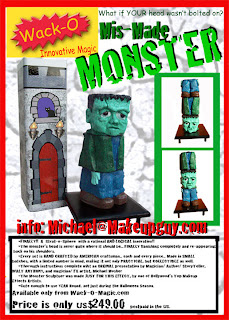 Posted by Mike the Make-Up Guy at 9:52 AM No comments: