There have been several books published on illusion in past years, but none have focused on presentation, the key ingredient that so many illusion shows lack.  Several of the books also stress the importance of originality, but none offer any specific suggestions to foster original thought or any exercises that promote creativity.

Originality and creative thinking are not things that one does naturally or because one is told to.  These are things that must be taught and cultivated like fine wines and pearls.  Performers and other artists are told from an early age to adopt a style and are often told to pick someone whose work they admire and use them as a role model.  Rather than use this role model as a teacher, they use the inspiration to make a copy.  Like most copies, the original is always better.

Unfortunately, most parents are the worst offenders at promoting this, and not encouraging individuality.  From birth, kids are taught morals like, "Imitation is the sincerest form of flattery."  They are encouraged to "dare to be different" and then are ostracized for not staying within a prescribed norm.

During early performances,  no matter how bad or awkward, the parent is usually the one to say  "Wow! That was wonderful" They do this for a variety of reasons, primarily to boost the performer's fragile childlike ego and as often as not, to keep from seeing the same trick, dance step, song or whatnot, over and over and over.  I was very lucky when I was younger. When I loused up a trick, my parents would tell me and try to work out a better alternative.  When I started inventing my own magic, they would tell me when an effect had merit and when it did not.  I know that they became tired of seeing my Zombie routine over and over, but they told me what they liked and disliked This helped me to form a philosophy behind that effect that led me to the routine that won awards , and the applause of my audiences.

Magic is a little different from most of the arts because the whole realm of what we do revolves around secrets.  Dancers, painters, musicians and other artists can show a  spectator how a step, technique or song is done and that will not necessarily lead to the spectator being able to duplicate the feat.  A magician, especially stage magicians and illusionists cannot do this without the spectator being able to duplicate the feat, however crudely the presentation.  Does this make magic less of an art form?  I do not think so.  I do think that it means that the magician must work harder than any other artist on philosophy, technique and presentation.  Without skills in these areas, we are no better than people who  paint by numbers and call it art or people that paint ceramic statues and expect it to be called anything but a craft.  Sure,  a magician can follow all the steps and the effect will work, but until the presentation is perfect, it is not art.

This leads me to the subject of tutelage, or" lessons."  A dancer can take a dance class and get better. So can many other types of artists.  Since magic is grounded as much in the mechanical as in the technical, learning how more and more magic works does not necessarily make you a better magician.  In order for a magician to become a better magician, he/she has to not only study magic, but acting and dance as well. What younger magicians have to be taught is not the secrets to the tricks, but the frame of mind they need to perform real magic. It is not good enough to merely fool the audience, you must make them believe that what you did could have actually happened, much to the dismay of their eyes and the logical part of their brain.

Many magic teachers make the mistake of teaching a student an effect, and a routine, but rarely touch base on the "why." Why does this mis-direction work when another will not?  Why does the move need to be here rather than a different moment?  The concept of the why is something that most magicians are left to develop on their own, well after they have learned bad habits and well after they have been doing bad magic for many years.  Many magic teachers are not capable of passing on this knowledge because in most magicians it never fully develops into a  solid philosophy. In some magicians, it tries to gel and becomes a river of muddy sludge,  and some magicians think that the secret is the thing, making their teaching ineffective and their magic mediocre at best. 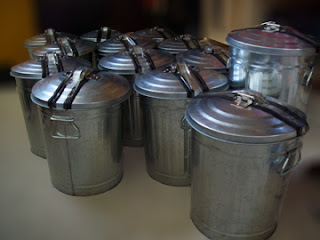 The last of their kind!  I have just a few of the Tiny Tricky Trashcans left.  Smart  in inventive school show magicians are snapping them up!!

Time to save a couple of pennies... and get yours before they're gone!!
Posted by Mike the Make-Up Guy at 11:39 AM No comments: