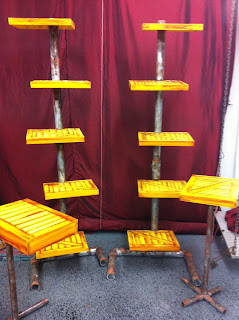 Part of the reason is that Wack-o-Magic has been busy.. I fulfilled a GINORMOUS order for Murphy's magic supplies.. 600 Boxes went out of the wack-o warehouse at the end of January.
I'm working on some new stuff... a new version of the Jack Hughes routine for the Giant and Dwarf.. with permission from the Jack Hughes estate!!!  It'll be a wonderful anti- bullying routine for kids shows and library performers.  I haven't finalized the materials yet.... but the prop has a GREAT pedigree.
The artwork is by Jarrett Fajardo, a super talented production designer from the Bay area who's art skills are only matched by his joyous outlook on life.

The routine, of course written by Walt Anthony will be reviewed and approved by one of the top bullying experts in the country. Author of several Anti-Bullying books.

In addition, I'm working with Walt on his prop for THAT INFERNAL CONTRAPTION..  new take on the old Square Circle ... with a SteamPunk Prop and a routine that will knock the razor out of Jack the Rippers Hands!!!!

I'm also gearing up for my booth at the MAGIC LIVE convention in VEGAS.. if you haven't heard of it.. it's a once every other year event at the Orleans Hotel in Las Vegas thats widely known as the best magic convention on the planet.  It's over 80% sold out of about 1400 seats for this year.. Get 'em before you miss out on the ONLY convention that I'm doing this year..  Meet me in person!! and Walt too!
Pictures will be coming shortly of how AWSOME the booth will be!!